Learn some tricks that will help you stop the wasps from making their nest in your very own pavement or backyard.

Wasps Are Not Particularly Winter-Friendly

One of the scariest animals you can have harboring in your gardens is wasps. Seeing them fly around our comfy space just gives you the extra stress, and their sting is excruciating. You really don’t want those insects anywhere near you. They may look cute, but as the saying goes, never judge a book by its cover.

As winter is here, the task of getting rid of these flying beasts becomes a little easier. Wasps do not survive well during winter. Usually, when the first ice hits, most of the wasps die (mostly due to starvation). The only remaining wasps are the female ones who would become the queens.

These wasps can still nest in your homes. Don’t be surprised when the numbers suddenly rise as the first breeze of spring arrives. They are very annoying and must be dealt with carefully. As soon as you spot a wasp nest being created, immediately contact pest control. 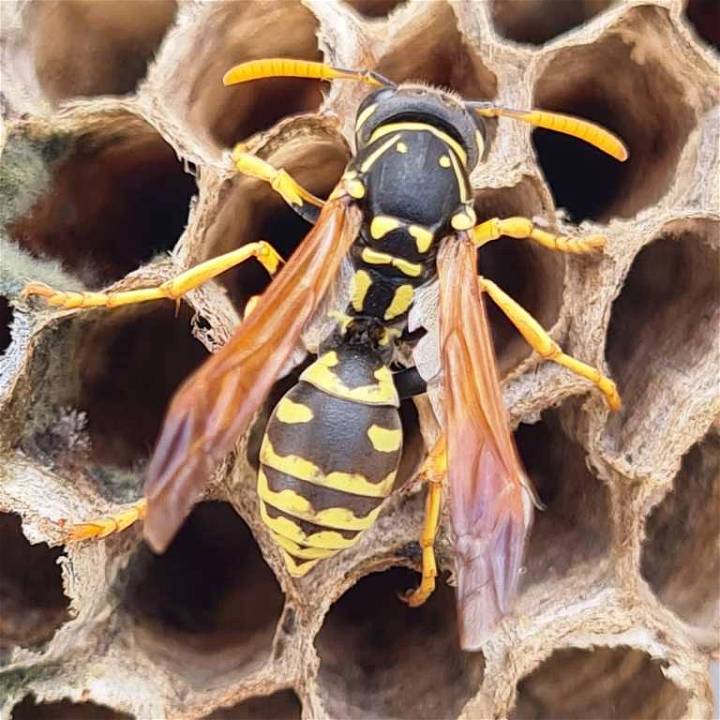 The Different Types of Wasps

Even though there wouldn’t be much of a problem with wasps for a few months during winter, there are still two particular types of wasps you need to keep an eye on.

The Yellow Jacket wasps come from a North American predacious family and have yellow and black stripes on their belly. The queens usually are ¾ inches in length (approximately) and are called the foundress responsible for initiating the process of nesting.

They make their nests using a mixture of a paper-like material, obtained from crushed wood fiber and saliva. They contain multiple layers that make them look similar to a beehive. Most people mistake the Yellow Jackets for bees. Yet, they are two completely different species.

The Paper wasps are more of a brownish color and have yellow spots on the body. The adult wasps are roughly ¾ to 5/8 inches in length. These species make their nest from fibers of plant stems and dead wood and mic them with saliva. The Paper Wasp Nests are a weave of very complex nets and usually look black or grey in color.

The cones of these nests are very brittle and elaborate and are bound together, making an umbrella shape. These nests have various cubicles that host wasp eggs larvae in their growing phase.

How Do Wasps Survive During Winter?

In the community of wasps, each type of wasps has a designated role to play. That is why most wasps were not designed to withstand the cold winters. For instance, worker wasps are responsible for looking after the new larvae and building the nest. Therefore, as the day becomes shorter, their services are no longer required.

These young female wasps have extreme importance during this time. As their bodies are ready to mate (making them the queen wasps of their next nest), they are expected to survive and see the light of spring to raise the new batch of wasps. As the temperatures begin to drop, their body can sense this, and they instantly look for a warm shelter.

If you are unlucky, this safe place might end up being your home. Make sure to seal any open cracks or fissures in your ceiling during the cold season. These frantic wasps wouldn’t think twice before making these cracks their warm shelter. They will make their way inside your house in an instant, and before you can know it, they will enter hibernation where they are slothful and preserve their energy.

Getting Rid of a Wasp Nest

You are standing in the center of your beautiful garden and enjoying the beautiful weather when your eyes suddenly meet a problem (a wasp nest) that you need to get rid of as soon as possible. So what do you do?

First things first do not take a stick and try to poke at it. Instead, you should pick up your phone and call pest control. They have more experience working in a constricted space and will have the right equipment and safety measurements with them.

Make sure to keep your children away from these nests as they are a ball of curiosity, and too much curiosity can lead to chaos. If the nest is located in proximity to your house and doesn’t seem to pose any risk for you and your family, just leave it alone, especially if it is a less harmful species like the paper wasps.

If you do spot a nest, make sure to destroy it as soon as possible. You don’t want to give it the opportunity to grow bigger. Find the queen and try to kill it, but be careful, don’t get stung in the process.

Other Things You Can Do

There are many other things you can do to avoid the possibility of a wasp nest being built, such as sealing any openings on the roof and securing them. If there is already a nest, there is a high possibility that in winter, it is empty so just knock it down.

If you know anything about wasps, then you would know how territorial they are. So hanging fake nests would be a great idea. If a queen wasp sees that a nest already exists, it will not try to occupy that realm. Yes, wasps show that much respect for each other, and this behavior might save you from a big hassle.

So Would You Allow a Wasp Nest in Your Home, or Would You Find It Icky?

Even though these are creatures of Mother Nature, they are quite irritating, and their sting can cause harmful effects to one’s health. They may look all pretty on the outside, but they are really dangerous.

Don’t let their looks fool you!